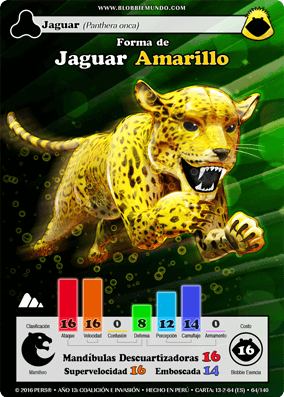 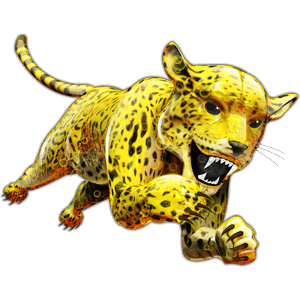 One of the strongest felines, that despite its large size (the largest in America), is very agile and is in danger of extinction. It is solitary and it hunts its prey by ambush, when the opportunity presents itself. It fulfills the role of superpredator, therefore it regulates the ecosystems in which it lives.

Blobbie Yellow chose the jaguar shape because it has an intelligent design, with great strength and speed, in a compact form of low energy cost.

If you want speed and power in your deck, the jaguar you must have. In Blobbiemundo, this shape has total balance: high speed and high attack, while being very economic, needing less than 20 of Blobbie Essence. The jaguar has a high attack, speed and camouflage, which makes it perfect if it is positioned to attack faster shapes from the trench. Its perception and defense are also acceptable. Using it from trench or a direct attack is most appropriate.

The Jaguar Shape Card is in the Yellow Deck and can also be found, at random, in envelopes from the Chromatic Massacre expansion.