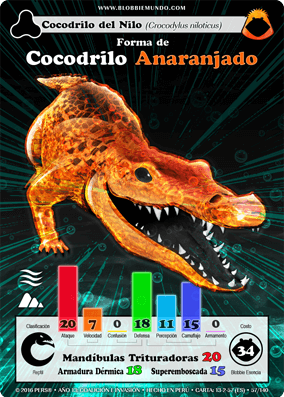 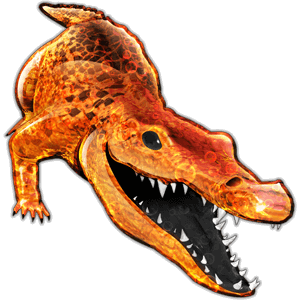 Kings of the Nile and direct descendants of the dinosaurs, these cold-blooded reptiles are carnivorous and attack their preys camouflaged under rivers, from where they launch to bite them and plunge their bodies to drown them. Crocodiles do not chew, they just swallow.
In order to air their bodies, they stand on the shores with their snout open. Their eyes have special crystals that allow them to see underwater without damaging their vision.
They can weight half a ton and they can reach speeds of 20 mph (35 kph).

Blobbie Orange chose the Crocodile Shape because its habitad is the jungle and its way of life is wild, things extremely attractive for an adventurous Blobbie.

The Orange Crocodile, being optimized for two environments, is ideal for attacks after having activated the Teleportation Cosmic Card to send your rival to an unfavorable environment. In addition, with its attack of 20 it can defeat even the largest shapes, especially if it ambushes with its great camouflage. Like every good reptile, it has a very good defense (18) which it can use to withstand attacks from its rival.

The Nile Crocodile Shape Card is in the Orange Deck and can also be found, at random, in envelopes from the Chromatic Massacre expansion.