Ñak’aq is a very shy and nervous supay, who is unable to face his enemies face to face. Any light or loud sound can easily scare him away.

Ñak’aq moves quickly, hiding in holes, cracks and shadows, approaching his victims stealthily, usually while they sleep, to bite them with his ventral appendix and absorb their fat and vital energy. When his victims react to the pain, they see in front of them Ñak’aq's horrific face, and his hypnotic eyes which prevent them from moving or shouting … just witnessing in horror as life slowly escapes their body.

Once Ñak’aq has fed, a physical and psychological transformation occurs within him. His body, formerly weak and thin, becomes strong and robust thanks to the vital fats and energies from his victims. And his character, formerly shy and cowardly, becomes confident and aggressive. When he is in this state, Ñak’aq enjoys looking for new victims he faces face to face to slaughter slowly them with his long claws. Generally, Ñak’aq loses the fat and energy absorbed over the course of a day and returns to his weak and shy state.

It is said that when sleeping you must make sure to close all doors and windows, or else you would risk that when you wake up, the last thing you sees is Ñak’aq consuming your insides … 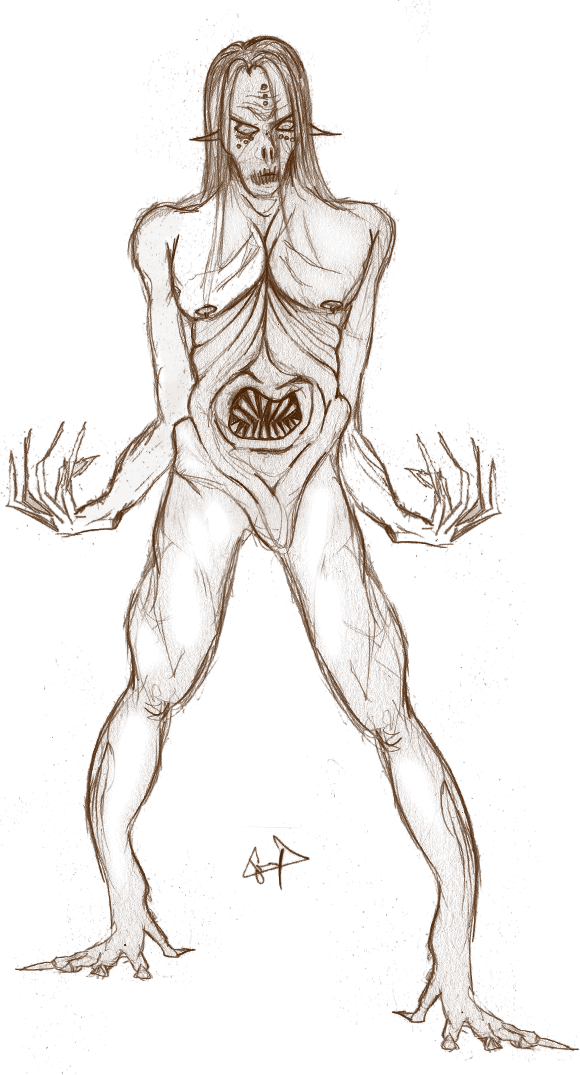 Ñak’aq's altered genes give him a monstrous appearance and a deformed body with excess skin hanging from his thin body.

Ñak’aq has a vestigial mouth on his face. His true mouth is his ventral appendix, which can extend out of his body to dig into the belly of his victims and absorb their fat and vital energy.

By absorbing fat, Ñak’aq revitalizes his body and gains almost superhuman strength. If his victim possesses any special power connected to their body's vital energy, this power is temporarily absorbed by Ñak’aq.

Ñak’aq has long, sharp claws with which he can slaughter his victims.

Ñak’aq also has hypnotic eyes capable of paralyzing and numbing his victims, facilitating the extraction of fat from their bodies.

Ñak'aq™ specifications for the INKAS: The Legend™ game.

Ñak’aq can absorb the vital fat of his enemies by paralyzing them.

Ñak’aq can use the absorbed energies from his dead enemies to revive their abilities.