Ayar Kachi is one of the Ayar brothers, older than Awqa by a year.

Kachi is a nice and good-natured teenager who is always in a good mood and always searching for fun.

He finds beauty in everything around him and everything seems new and exciting to him. He loves to enjoy the good things in life, whether it is having drinks, enjoying a good meal, or admiring beautiful women.

Kachi has a very active mind and ramdon thoughts often fill his mind, which makes it very difficult for him concentrate on something for a long time. Kachi is insecure in his decisions and often double-guesses himself, asking his brothers for their opinion to feel calm with his decisions.

Kachi is always worried about his appearance and does exercises to try to stay fit, although his great appetite does not help him achieve his goals. He always tries to convince his brothers to accompany him in his exercise routines and Manqu often becomes his reluctant partner.

Kachi has a good relationship with his wife Waqu, although of the sisters, he would have preferred to marry someone more feminine like Qura, since Waqu's power and masculinity sometimes scare him a little.

Kachi is an extremely powerful warrior, but he hates conflict and does not feel comfortable in the role of a warrior. He hopes that one day the war with the Chankas will be solved in a peaceful way and return to a life of peace and tranquility. 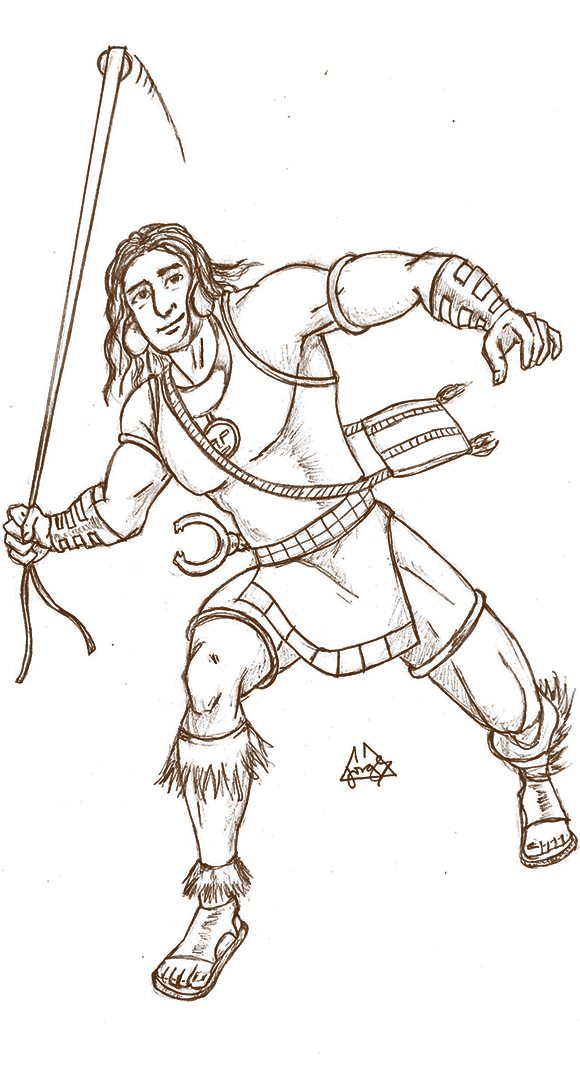 Having Wiraqucha's blood running through his veins, Kachi is gifted with superhuman strength. This strength does not come directly from the muscles in his body, but from an unknown power that allows him to lift, throw, destroy, and crush objects of great mass and density. Kachi's body, although more resistant than that of a normal human being, is not impervious to attacks of great force.

Kachi is the holder of the Electromagnetic Force Weapon of Electricity, which was handed to him by Waqaychaq Mama. This weapon gives him limited control over Primordial Electricity (the fourth Primordial Wave, which includes kinetic and static electricity).

The Electric Sling is used to throw the Electric Orbs and perform long distance attacks. Combined with Kachi's superhuman strength, this is a very powerful weapon capable of shattering mountains.

The Electric Sling can also be used as a whip that discharges high-voltage electricity in contact, capable of incapacitating enemies for a short time.

The Electric Scepter can also attract different types of Primordial Energy and wrap it within an Electric Orb, which Kachi can save for future use.

Electric Orbs are electric charges created by the Electric Scepter wrapped in one of these seven metals: Lead, Copper, Tin, Mercury, Iron, Silver, and Gold. Each metal orb has a greater electric charge than the previous one, starting with the Lead Orb (with almost zero electric charge) up to the Gold Orb (with millions of volts of electric charge) capable of reaching high enough temperatures to melt sand into glass.

Electric Orbs only explode when impacting a surface with great force.

Ayar Kachi™ specifications for the INKAS: The Legend™ game.

Kachi can make long-range attacks by throwing Orbs with his Electric Sling.

Kachi can generate a high voltage Gold Orbs to throw with his Electric Sling.