Mama Qura is one of the Ayar sisters, older than Uqllu by one year.

Qura is an independent and rebellious teenager, who is not afraid of anything or anyone. She loves to be free and do things her way. She can't tolerate anyone ordering her, or telling her how to live her life.

Qura loves adventure, but is impatient and gets bored quickly. She needs constant change in her life, be it her hair, her clothes, her hobby, or her lover, she always needs to change something in her life.

Like all the Quyas, Qura is known as a "Virgin of the Sun", title that, in her case, is more honorary than precise. Qura loves being the center of attention, especially when she has men around. She knows she is attractive and likes to wear tight clothes and short skirts that highlight her long legs.

Qura is competitive with other women, and for this reason she has never had female friends, apart from her sisters. Qura is protective of all her sisters, and especially her younger sister Uqllu, for whom she feels a special affection.

Qura hates that she and her sisters have been forced to leave their home to marry strangers. And although in the eyes of her nation, Awqa is now her husband, this is something she will never accept ... even if this is an order from the almighty Wiraqucha. 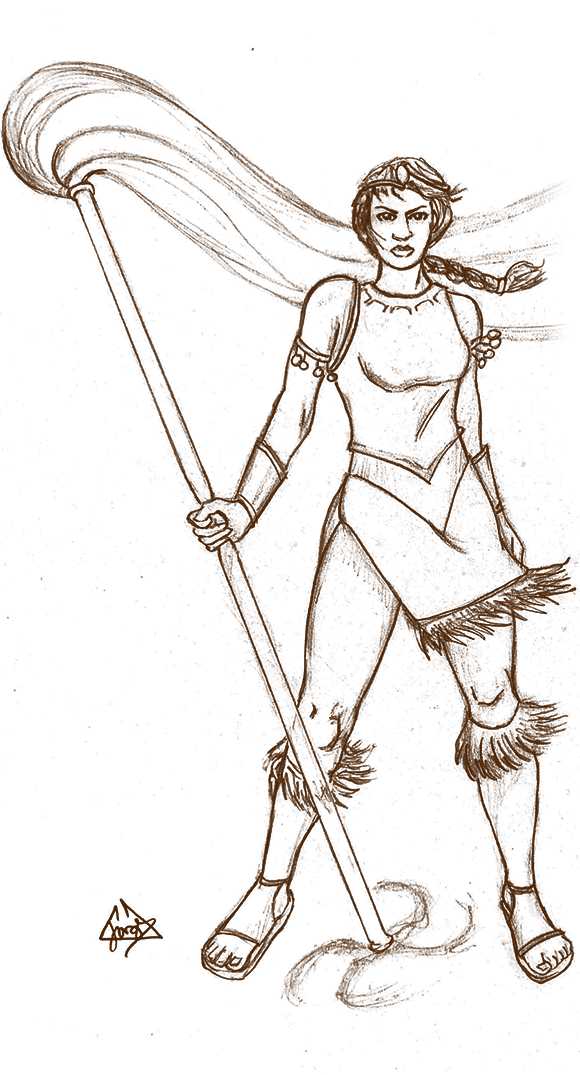 Having Wiraqucha's blood running through her veins, Qura is endowed with high regenerative powers. Qura is able to control the growth of her bones, skin, hairs, and quickly regenerate her body from lesions and moderate-level wounds. Often, Qura uses these powers to grow a combination of nail and bone from her fingers to create sharp claws with which she can attack her enemies. The regenerative process leaves Qura tired and extremely hungry.

Qura is the guardian and protector of the Primordial Sphere of Air, which was merged into her body with the archaic magic of Waqaychaq Mama. This Elemental Sphere covers Qura's body with an aura that protects her against the damaging effects of the Primordial Air. Qura can expand that aura to protect people or objects that are in physical contact with her.

Qura is also the owner of one of the Primordial Elemental Staffs, which was also given to her by Waqaychaq Mama.

With her Elemental Wand, Qura can access the mystical powers of the Primordial Air Sphere which gives her, potentially, absolute control over Primordial Air (the third Primordial Element, which includes Air and other matter in gaseous state).

In addition to controlling it, Qura can create Primordial Air "out of nothing."

The Elemental Staff, like every Primordial Staff, is only a catalyst for the powers of the Primordial Sphere with which it is in contact. Out of the hands of Qura (and the other Quyas), the Staff is useless.

With the Elemental Wand, Qura can, among other things, throw gusts of Air, levitate, freeze long-distance objects, create tornadoes, and control the atmosphere of the planet.

The control that Qura has over Primordial Air will continue to increase over time.

Mama Qura™ specifications for the INKAS: The Legend™ game.

Qura can use her Elemental Staff to make air lift her over walls. She can take one ally or enemy with her.

Qura can use her Elemental Staff to make winds propel her at cyclonic speeds. She can take one ally or enemy with her.