Mama Rawa is the oldest of the Ayar sisters.

Rawa is a motherly and kind teenager, who loves to have fun, talk, and meet new people. Although Rawa can be a lot of fun, Rawa can also be a bit annoying and rude. Having the gift of mind reading, Rawa learned from a very young age that people lie, and they lie too much, so she has very little patience for the falsehoods and "stupidities" of people. Rawa is never afraid to express what she feels and generally says exactly what she has in mind, so she hurts sensibilities ... very often. Rawa has no qualms about using strong language or curses, although she never does it with bad intentions.

Being the oldest of the sisters, Rawa considers herself the "mother" of the group and is always concerned about the health and emotional state of her siblings. Rawa often prepares elaborate banquets for her siblings, and finds any excuse to make a celebration.

Since childhood, Rawa has looked forward to the day of her marriage. Now that she has Uchu by her side, she feels that finally her life makes sense and she waits for the day when she can have a baby to feel fulfilled.

Rawa admires her husband, and feels very happy by her side, although her husband's womanizing tendencies are something that constantly drives her out of her mind. 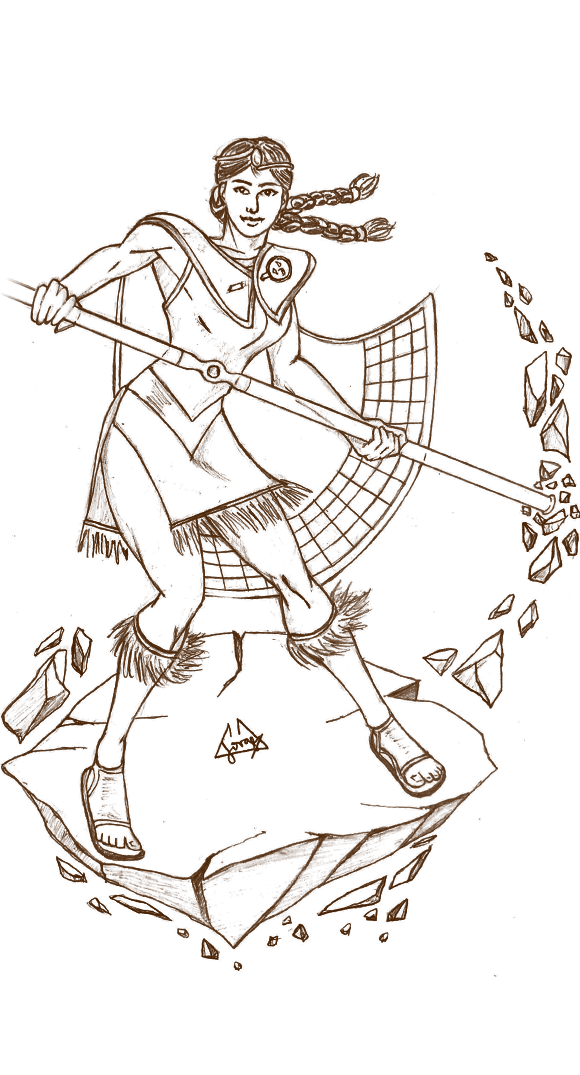 Having Wiraqucha's blood running through her veins, Rawa is gifted with the ability to read other people's thoughts. This ability is particularly strong with her sisters and with her husband Uchu. Through extreme concentration, she is able to project her mind into her siblings' minds.

Rawa is the guardian and protector of the Primordial Sphere of Earth, which was attached to her body with the archaic magic of Waqaychaq Mama. This Elemental Sphere covers Rawa's body with an aura that protects it against the damaging effects of Primordial Earth. Rawa can expand that aura to protect people or objects that are in physical contact with her.

Rawa is also the owner of one of the Primordial Elemental Staffs, which was also given to her by Waqaychaq Mama.

With his Elemental Staff, Rawa can access the mystical powers of the Primordial Sphere of Earth which potentially gives her absolute control over Primordial Earth (the fifth Primordial Element, which includes Earth and other matter in a solid state).

In addition to controlling it, Rawa can create Primordial Earth "out of nothing."

The Elemental Staff, like every Primordial Staff, is only a catalyst for the powers of the Primordial Sphere with which it is in contact. Out of Rawa's hands (and the other Quyas), the Staff is unusable.

With the Elemental Staff, Rawa can, among other things, throw bursts of Earth, create rock walls, move far away objects, create earthquakes, and control the planet's Lithosphere.

The control that Rawa has over Primordial Earth will continue to increase over time.

Mama Rawa™ specifications for the INKAS: The Legend™ game.

Rawa can use her Elemental Staff to hide underground and surprise her enemies before they can attack.

Rawa can use her Elemental Staff to control the gold from which the Tupayauri is made and steal it from her enemies.