Manchay, also known as "The Beast", is a genetic aberration created by the archaic science of the serpent-god Amaru Wiraqucha.

Manchay is a cold and bloodthirsty supay, with intelligence superior to that of a common supay and a strange code of honor and morals.

Manchay does not enjoy attacking weaklings, and if a group confronts him, the beast analyzes his opponents and first attacks the being he considers most powerful. When Manchay wants to challenge an enemy, the beast makes blood flow through his external veins, taking on a terrifying appearance to indicate to his opponent that he is ready for the fight.

Every night, Manchay travels through the endless corridors of the Amaru Wasi, waiting for any poor soul who dares to enter his palace, hoping to steal its secrets, risking a violent death ... 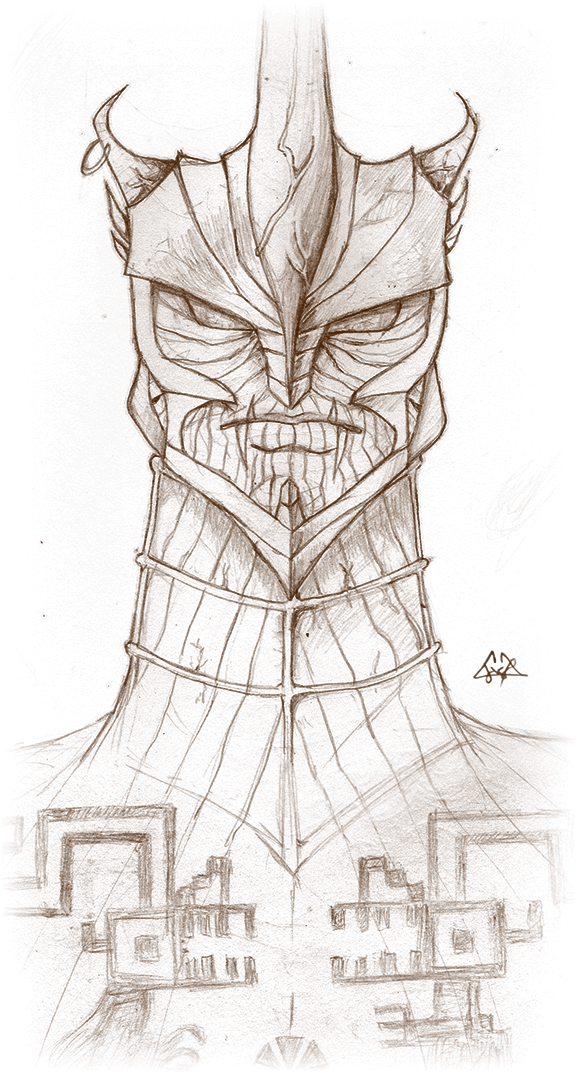 Manchay's altered genes give him a monstrous appearance, with an elongated neck, prehensile tail, and a body covered by a tough, but flexible, exo-skeleton.

Manchay is the perfect hunter, thanks to his keen senses, infra-red vision, strength, and superhuman agility. His tail and sharp claws allow you him easily climb any surface. His strong muscles and flexibility allow him to perform all kinds of acrobatic movements.

Manchay also has high regenerative powers, to the point of being able to completely regenerate members lost in combat.
Manchay has a long, sharp horn on his forehead, and when moving his long neck like a whip, the beast uses his horn to cut his victims in two. Manchay can tear this horn from his forehead, to use it as a kind of sword when attacking an enemy. Its regenerative powers make this horn grow again over the course of an hour.

His stubborn mind is immune to all kinds of telepathic and hypnotic attacks, including those of Simpira, Ñak’aq, and Amarus.

Manchay also has some invulnerability to Magic, thanks to his centuries of experience as an avatar of Amaru Wiraqucha.

Due to Amaru Wiraqucha's curse, Manchay becomes a stone statue for 18 hours each day. In this state, the beast is completely paralyzed, but he is virtually invulnerable to any attack.

The beast wakes up every midnight, when the secrets of Amaru Wasi are revealed ...

Manchay™ specifications for the INKAS: The Legend™ game.

Manchay can hide inthe shadows and surprise his enemies before they can attack him.

Manchay can use his prehensile tail to steal objects from a distance.