Amsay Rumi is one of the warriors of Chanka royalty.

Being one of the direct descendants of the semi-divine warrior Anquwillka ("Ancovilca"), Amsay is endowed with royal blood that gives his body superhuman vitality.

Loyal, enthusiastic, and cheerful, Amsay Rumi is not what one would expect in the typical Chanka warrior. Amsay is a responsible teenager with an aura of child innocence. Although Amsay enjoys military life and is a loyal soldier to Yawar Supay, he does not enjoy entering battle or killing enemies. He knows that it is a necessary part of his obligations to his nation, but when possible, he prefers to incapacitate an opponent rather than kill him.

Although not superhumanly strong like Ayar Kachi, Amsay is quite strong and performs all kinds of physical training, one of the things he loves most about military life. Amsay is very strict about what he eats, and always tries to improve his physical constitution.

Amsay has a very close relationship with his warrior companion Yana Uru, and although he is attracted to her, he would never act on those feelings out of respect to Yawar Supay.

Amsay was chosen by Amaru Wiraqucha as one of his main avatars to perform spells. For this reason, Amsay is in charge of performing the necessary rituals and offerings to ensure a victory in battle. And if in battle he is forced to kill someone, he never forgets to pray for the souls of his victims so that they are welcomed by the gods.

If things were different, Amsay would possibly be an ally of the Ayar Siblings ... but the gods decided to make them enemies. And as such, Amsay will fight to the end to defeat the Inka nation. 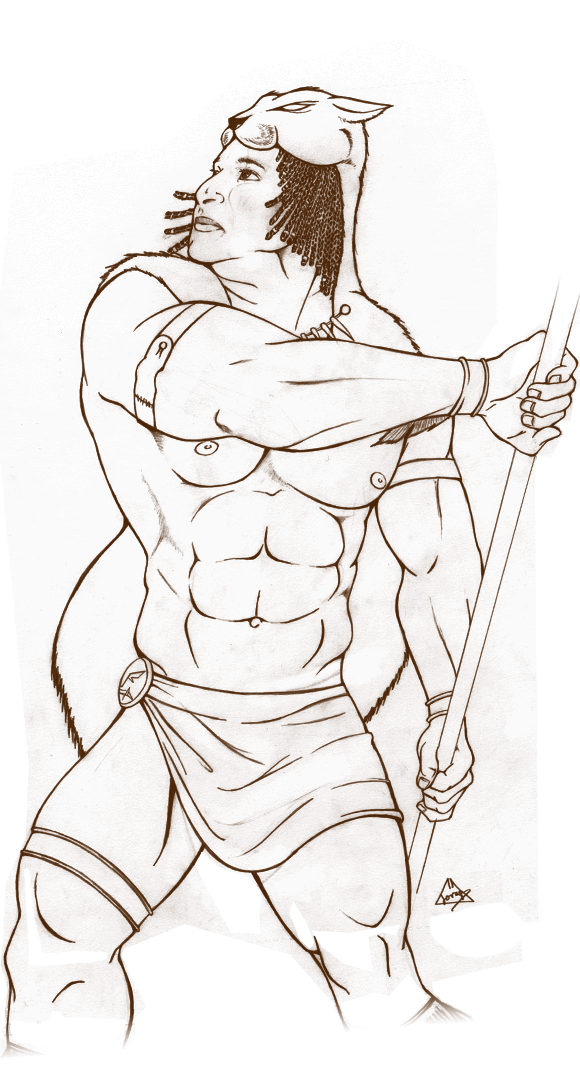 By having Anquwillka's blood running through his veins, Amsay is endowed with superhuman vitality, which gives him superior physical resistance and the ability to regenerate his body from moderate level wounds and injuries.

Amsay is the owner of the Celeractive Hypervisic Force Weapon, which was handed to him by Amaru Wiraqucha. This weapon gives him limited control over Primordial Celeractivity (the first Primordial Spiral, also known as "dark radioactivity").

The Celeractive Blowgun can shoot paralyzing venom which “freezes” victims in place for an hour or more. Depending on the amount of venom Amsay decides to shoot, it can also be fatal.

The Celeractive Blowgun combines with one of the Celeractive Knifes to create a Celerative Spear with can be used as an energy harpoon.

If combined to form the Celeractive Spear and plunged into the ground, it creates a radiating field which accelerates Amsay’s movements for a few seconds, giving him a short burst of speed before launching into attacks.

The Celeractive Deceleration Knife can cut through most materials.

If combined to form the Celeractive Spear and plunged into the ground, it creates a radiating field which decelerates everything around Amsay for a few seconds (within a radius of 3 meters / 10 feet). Amsay often uses this a protective force field, since attacks slow down before reaching him.

Amsay Rumi™ specifications for the INKAS: The Legend™ game.

Amsay can use his Celerioactive Blowgun to blast paralyzing poison.

Amsay can use his experience as an avatar of Amaru Wiraqucha to evoke the spirit of dead warriors and use their abilities.