Ayar Manqu is the youngest of the Ayar brothers.

It is believed that Ayar Manqu is a son of the almighty god Wiraqucha born through human parents, which is why he is considered part human and part Wiraquchan. Manqu is taller than the average runa (Qhichwa people), which is considered a sign of his Wiraqucha heritage.

Manqu is a kind and innocent teenager, unable to lie or harm anyone. But he is also naive and very insecure about himself and his physical appearance. He often feels that he "doesn't fit in" and prefers to be alone. This lack of self-esteem tends to annoy his brothers, especially Uchu, who sometimes considers him weak and even a coward.

When he feels sad, Manqu likes to spend time playing the qina ("quena"), creating beautiful ceramics, or taking care of his crops.

Manqu considers his brother Awqa his best and only friend. Manqu likes to share time with him but Manqu is often too needy of him.

Manqu was recently married (via arranged marriage) to the beautiful Uqllu. But because of his insecurities and having been forced to marry at such a young age, he has an awkward relationship with her.

Manqu likes to live in his inner world of imagination and feelings. He is spiritual and a dreamer, and hopes to one day unite his people and help them improve their lives. He feels that this is the reason why he was born ... his destiny. But if he wants to turn his dreams into realities, and be of some help to his people, he will need to become self-confident and mature ... fast. 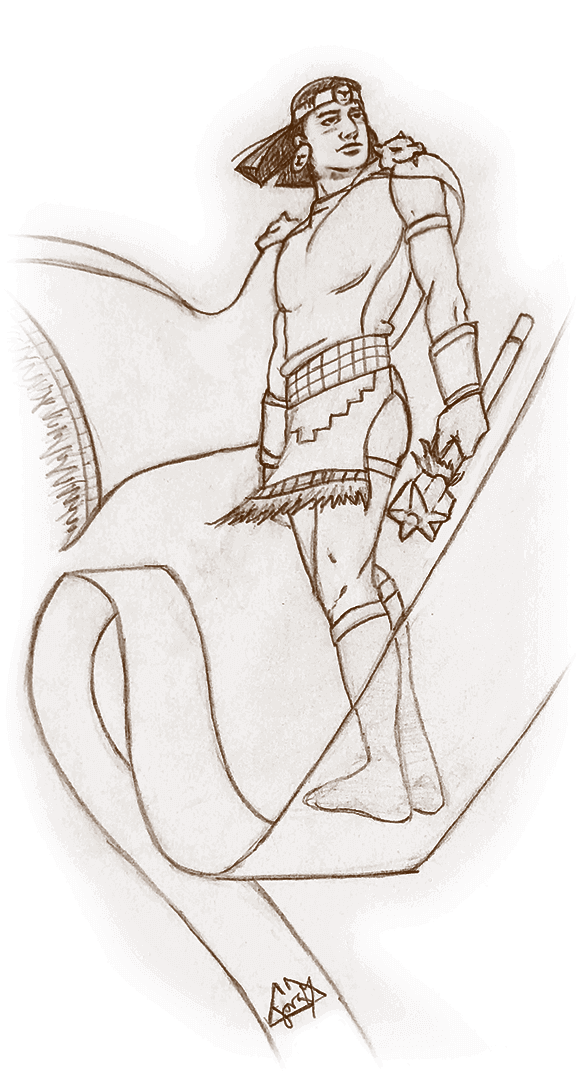 Having Wiraqucha's blood running through his veins, Manqu is gifted with a special ability but because of his young age, this ability has not yet manifested.

Manqu carries the Tupayauri wand, a gift from the wise Tunapa, as a magical amulet to protect him against evil, but the powers of this wand have not been proven.

Manqu is also the holder of the Electromagnetic Force Weapon of Light, which was handed to him by Waqaychaq Mama. This weapon gives him limited control over Primordial Light (the second Primordial Wave, which includes infrared, ultraviolet, and visible light).

The weapon is composed of 3 parts: The Inti Disc (Light Shield), the Light Macana, and the Light Hatchet.

The Inti Disc, which is really the Primordial Sphere of Electromagnetism embedded in a gold mask, energizes all Electromagnetic Force weapons and recharges with solar and stellar light.

The Inti Disc divides its power into 5 Primary Waves: Radiation, Light (which it retains), Sound, Electricity, and Magnetism.

The Inti Disc can become a tiny supernova that can blind, heat, energize and/or incinerate everything in its reach (while protecting its owner from these effects).

The Inti Disc can also become an impenetrable Light Shield. The Light Shield can create force fields and can be launched as a concussive force missile.

The Light Macana can generate an aura of energy around itself, making it strong enough to destroy many materials.

The Light Macana can also project light of different intensities to illuminate, energize, or burn.

The Light Hatchet can generate an aura of energy around itself making it sharp enough to cut through many materials.

The Light Hatchet can also project a low-density energy field that can "cut" through liquids, gases, or intangible substances such as water, air, energy rays, and even telepathic waves.

The Electromagnetic Force Weapon of Light has other powers that Manqu will discover over time. 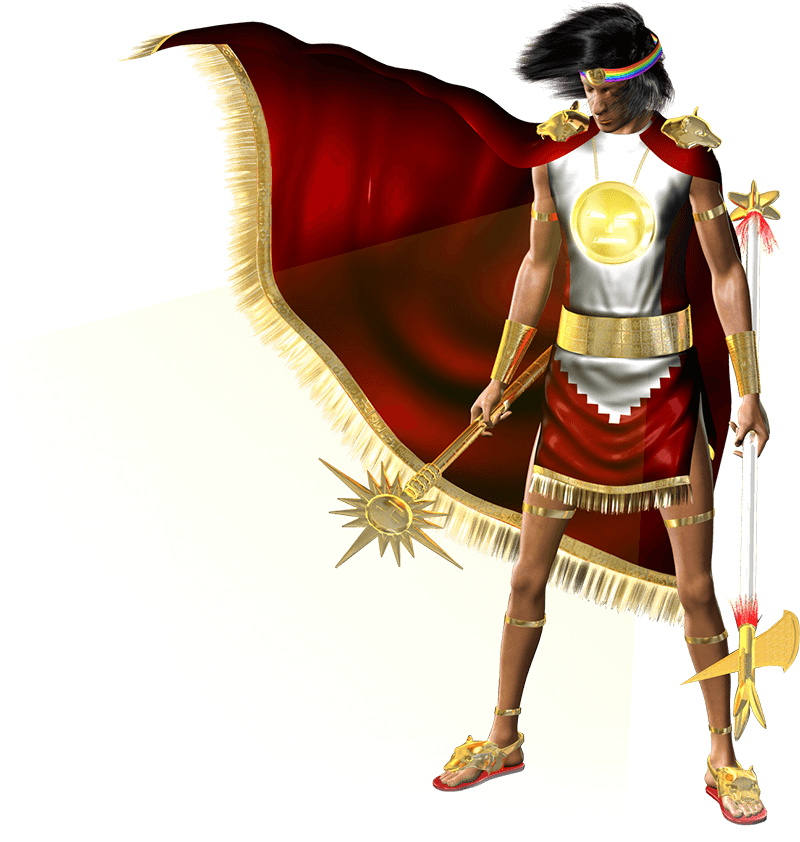 Ayar Manqu™ specifications for the INKAS: The Legend™ game.

Manqu can turn the Inti Disc into a Light Shield that protects him and his allies against any enemy attack.

Manqu can use his Light Shield to create a Light Path with which he can quickly transport himself and his allies to other cities.